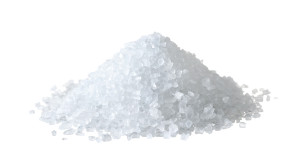 Chloride discharge levels above the EPA standards are being reported by sewer agencies across the state of Wisconsin and the nation.  For large water users, both commercial and industrial, there are some simple ways to reduce chloride discharge.

What exactly is chloride pollution?

Chloride is the negatively charged ion of salts, such as sodium chloride or potassium chloride. It is naturally found in fresh and saltwater bodies, and is essential to biotic life.

Chloride is a particular problem because of its persistence in waterbodies. Traditional mechanical and chemical/biological wastewater treatment processes do not remove chloride in effluent; therefore chloride passes through the system as effluent and is typically discharged into freshwater bodies (MMSD 2015***). Technologies such as reverse osmosis that can remove chlorides are expensive, energy-intensive processes with large residual streams.

How businesses can reduce their chloride discharge

While it only costs 20 cents to add a pound of salt to water, it costs five dollars to remove it. A recent study conducted by the Madison Metropolitan Sewerage District showed it could cost from $300-million to $2.3-billion to remove the required amount of chloride needed to protect the area’s freshwater supply.

1. Get your water softener adjusted properly by a trained technician

When industrial water softeners are installed, they are routinely left at the factory settings. When not configured to a site’s specific water consumption requirements or the hardness of the water, the system won’t operate as efficiently as it could.

If you have a timer based regeneration system, check the intervals between regeneration cycles. You might consider switching from a timer-based system to a demand initiated regeneration (DIR) control.

Using a flow meter, DIR controls deliver a much greater level of efficiency. Because DIR’s have proven to be incredibly effective, cities like Brookfield, Wisconsin are making these systems mandatory for any new customer, residential and commercial alike.

By upgrading your site’s current softening equipment, salt consumption can be greatly reduced, thereby reducing operating costs. Within the past 10-20 years, advancements in water softening technology have seen vast improvements in performance. In residential applications, upgraded equipment can result in up to a 48% reduction in salt usage.

According to Environmental Specialist, Kathleen Lake at Madison Metropolitan Sewerage District (MMSD), “Softeners are often overlooked or forgotten. A business in the area that recently upgraded their existing softeners was able to cut their salt use by more than half. They recouped their cost within the first year. There are lots of other stories like this one – of businesses saving money and protecting the environment.”

Brine reclamation diverts a portion of the brine used to regenerate the softener back to the brine tank. Once the resin bed becomes regenerated, the “sweet” brine is stored in the tank, perfect for reuse.

According to studies conducted by the Water Department at the City of Brookfield, Wisconsin,  a brine reclaim system can potentially reduce salt expense by 25% or more and decreases water consumption, with a typical return on investment in as little as one year.

To combat the costly corrosion and energy loss that can result from hard water, industrial and commercial water users employ water-softening technology. But when water-softening equipment is either antiquated or not properly configured, additional chlorides enter our waterways.

Businesses today have a responsibility to help maintain healthy waterways, thereby protecting freshwater vegetation, animals and the water we drink. Fortunately, there are some fairly straightforward ways large water users can reduce chloride discharge through treatment  – differences that are good for both the environment and a company’s bottom line.